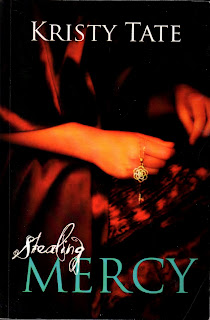 Stealing Mercy is the story of a young woman named Mercy Faye who is determined to not only escape a horrible situation, but to help others do the same. From the beginning of this story, we follow Mercy's unfortunate association with a man whose designs on her are less than honorable. When he attempts to remove her from her simple, yet pleasant life and force her to into a compromising lifestyle, she flees, but only to meet up with him at a latter date in another city. Throughout the book,  Mercy makes several attempts to rescue the women that he has kept in a brothel on an island away from the bustle of the city.

Kristy tells two parallel stories set in different eras, the second story has Bette Michaels sorting through letters that tell Mercy's story while telling a little bit of her own, but my favorite part of this book was Mercy's tidbits of cooking and herbals remedies, which Kristy begins each chapter with. I found myself wanting to try a few!

Here is Kristy's back cover blurb in her own words:

After a night of terror, Mercy Faye flees New York. Disguised as a boy, she sets sail for a new life in Seattle, but her nightmare Mr. Steele, follows close behind. Armed with only her chocolates, laced tarts and wits, Mercy sets out to destroy Mr. Steele and his Lucky Island brothel.

Trent Michaels is searching for his missing cousin. He can't afford complications --or romance--yet, at every turn he finds Mercy Faye. The night before the Great Seattle Fire of 1889, flames spark between Mercy and Trent leaving the life they know and the city they love in ashes.
Their story reaches forward through time to Bette Michaels, a genealogists, struggling with grief after the sudden death of her husband. Although generations apart, as Bette unravels Mercy's story, she learns that a life can be rebuilt--even after everything is lost.
Through Mercy, Bette learns that sometimes the only way to find happiness is to steal it.

Kristy Tate lives in Southern Orange County, California with her family. She studied English Literature at Brigham Young Unverstity and at BYU's International Center in London. Stealing Mercy is her first published novel. For information and updates on Kristy's next novel, follow her blog at: www.kristystories.blogspot.com

You can purchase Stealing Mercy in paperback or on Kindle from http://www.amazon.com/Stealing-Mercy-ebook/dp/B005FCFHZ6

Posted by Theresa Small Sneed at 8:15 PM No comments: Links to this post